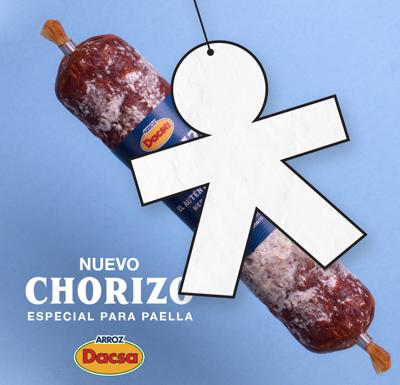 “BE CAREFUL what you believe today if you’re in Spain – December 28 is the national equivalent of April Fool’s, and you can expect all types of attempts to pull the wool over your eyes over the next 24 hours”……This is one of the most popular and entertaining Christmas traditions in Spain, the equivalent of April Fool’s Day. December 28th  is the day when everyone is allowed to play practical jokes and when it is customary to buy joke articles in Christmas markets like the one in the Plaza Mayor square in Madrid.

“Just to wind Valencians up , famous regional paella-rice firm Arroz Dacsa announced a new version about to hit the market which was ‘specially designed to go with chorizo’ and a new own-branded type of chorizo ‘specially for paella’ (first picture).Fortunately, enough Valencians checked their calendar before online mutiny broke out.”(THINK SPAIN NEWS)

This celebration appears to have its origins in an event narrated by the Bible concerning King Herod and the innocents, although over the centuries it has evolved to become a boisterous day in which even the media usually reports on some outrageous and completely invented news story. One of the most widespread jokes on this day is to stick a figure cut out of white paper on someone’s back (without them realising). The word in Spanish for this practical joke is an “inocentada”. And, in the numerous Christmas markets (usually located in the large squares in the cities) you can find a whole range of joke articles (wigs, itching powder, false ink…).Many areas in Spain also have other typical local celebrations on 28 December. Examples include the festivity of Los Locos (or “lunatics”) in Jalance (in Valencia, the mayor of the lunatics governs the town for 24 hours); the festivity of the Holy Innocents in Nogalte (in Murcia, with popular dancing and bands of singers); the Danza de Los Locos, or “dance of the lunatics” in Fuente Carreteros (in Cordoba); the “Obispillo”, or “little bishop” (celebrated in places such as Burgos, Palencia and Murcia, where a small boy is chosen to carry out the functions of the bishop for one day); and the “Festa dels Enfarinats” de Ibi (in Alicante, involving a “battle” fought with eggs, flour and firecrackers).

Posted in GOTTA READ IT

Tags: ALL LEVELS, B2

Smart Up Your English

learn English and share your experiences (SERENDIPITY= the accidental discovery of something pleasant and useful!)